The Economist explains economics: What is the Keynesian multiplier? 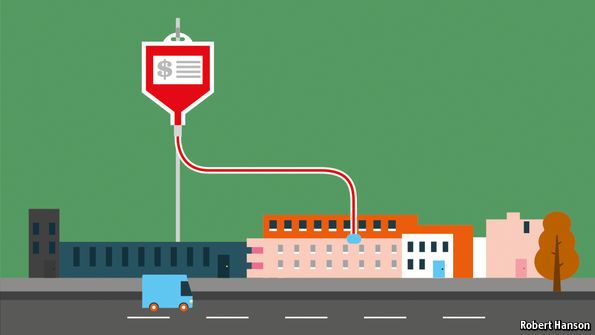 This week “The Economist explains” is given over to economics. For each of six days until Saturday this blog will publish a short explainer on a seminal idea.

WHEN Barack Obama sought to boost America’s ailing economy with a fiscal stimulus package worth more than $800 billion in the wake of the financial crisis of 2008, a fierce debate ensued. Some economists reckoned the spending would do little to help the economy. Others suggested it could add much more than $800 billion to GDP. These arguments centred on the value of the Keynesian multiplier, which determines by how much output changes in response to a change in government borrowing. (With a multiplier of two, for example, GDP rises by $2 when the deficit increases by $1.) The Keynesian multiplier is one of the fundamental—and most controversial—concepts in macroeconomics. Where did it come from and why is there so much disagreement about it?

The multiplier emerged from arguments in the 1920s and 1930s over how governments should respond to economic slumps. John Maynard Keynes, one of history’s most important economists, described the role of the multiplier in detail in his seminal book, “The General Theory of Employment, Interest and Money”. Conventional wisdom had it that government borrowing raises interest rates and uses resources which might otherwise have been spent by private firms or households. Keynes agreed that this could be the case in normal times, but he also argued that when an economy is operating below full employment, how much is spent determines the levels of investment and income rather than what the economy is capable of producing. During such slumps, stimulus provided by the government does not crowd out private activity, because the economy is operating below capacity. Instead, it ripples across the economy, boosting the incomes of those who receive government contracts or benefit payments, who then go on to spend and invest more. Should the government cut back, the ill effects would multiply in the same way.

Keynes’s thinking upended economic policymaking. It did not settle the debate, however. The Keynesian consensus fractured in the 1970s in the face of criticism from new intellectual camps within economics. The “rational expectations” school, led by Robert Lucas, argued that fiscal policy would be undermined by forward-looking taxpayers. They should understand that government borrowing would eventually need to be repaid, and that stimulus today would necessitate higher taxes tomorrow. They should therefore save income earned as a result of stimulus in order to have it on hand for when the bill came due. The multiplier on government spending might in fact be close to zero, as each extra dollar is almost entirely offset by increased private saving. The backlashes led to the emergence of “New Keynesianism”. Its adherents, among whom are many of the leading economic policy-makers of the past few decades, typically hold that monetary policy is a more powerful and efficient macroeconomic tool than fiscal stimulus. When central banks do their job correctly fiscal policy is unnecessary, they argue; monetary corrections should cancel out the effects of fiscal expansion or contraction, squishing the multiplier to near zero.

The financial crisis led to a reawakening of old Keynesian ideas, however. Scores of papers have been published since 2008 attempting to estimate fiscal multipliers. Most suggest that, with interest rates close to zero, fiscal stimulus carries a multiplier of at least one. The IMF, for instance, concluded that the (harmful) multiplier for fiscal contractions was often 1.5 or more. Even as many policymakers remain committed to fiscal consolidation, plenty of economists now argue that insufficient fiscal stimulus has been among the biggest failures of the post-crisis era. Decades after its conception, Keynes’s multiplier is relevant, controversial and ascendent.

Over the past several weeks The Economist has run two-page briefs on six seminal economics ideas. Read the full brief on the Keynesian multiplier, or click here to download a PDF containing all six of the articles.

Step-By-Step: How Walking Has Changed Over Time Source Walking may seem like a simple everyday act. But the act of walking has evolved over time, and a new book, “Walking Histories, 1800-1914”